This year, World Water Day is focused on the interconnectedness of water and climate change. Water is the primary resource affected by climate change, with repercussions on the supply of drinking water, sanitation, and water used for food and energy production. Or in other words, as suggested by climate-change experts, “If climate change is a shark, then water is its teeth”.

Against this backdrop, young people are increasingly recognized as the driving force for action behind the climate movement – and for injecting water into the climate agenda. Currently, more than half of the global population is under the age of 30, making it the largest youth population in history and the ones who will be most affected by the climate change induced disruption of water resources.

Not enough is understood and communicated about the devastating risk of climate change to the world’s water resources. Currently, 50% of our drinking water comes from glaciers, which are melting at an unprecedent speed. Higher air temperatures are causing increased flooding – which is affecting more people globally than any other natural hazard. If no measures are taken, water scarcity, exacerbated by climate change, is expected to cost some regions up to 6% of their economic growth.

With water and climate change being complex topics in and of themselves, not to mention how they intersect, much remains to be done to raise awareness in a comprehensive, accessible and action-oriented way. The World Youth Parliament for Water (WYPW), a globally-recognized youth network, has therefore dedicated one of its three main working pillars towards awareness-raising. Noting the need to mainstream the unique role of water throughout the climate agenda, the WYWP is currently broadcasting “The ClimateReady Podcast”, sharing stories of youth action on combatting the climate crisis and reaching thousands of people.

All sectors can learn from these efforts, as an increased awareness of the water and climate change link will lead to an enabling environment for change and corporation, and more so, safeguard our water resources.

Young people are organizing and uniting around the world to raise awareness through climate strikes – bridging political differences and linking separate sectors. Rather than confronting one environmental issue at a time, they are holistic in their advocacy, recognizing the strength in combining efforts.

During the 2020 Annual Meeting in Davos, Global Shapers engaged in climate work and discussions on the future of water. Their participation, enthusiasm and conviction to further incentivize young people to scale up water innovation, resulted in the stakeholder proposal to develop an award. Rather than being a one-off entrepreneurial activity, this prize aims to be a milestone in a long-term water advocacy agenda.

While having a Corporate Social Responsibility programme is common, more companies could push the cause. An example is Heineken’s “Every Drop” campaign, dedicated to lowering water usage to combat water scarcity.

Choose to be a champion, mobilize for the climate-water cause and implement what you advocate!

Since 2012, the rise in smart phones has been dramatic (to date, there are more people with a mobile phone than access to a flushable toilet). Today’s youth is the generation most accustomed to technology from an early age. With the increase of artificial intelligence, smart sensoring and blockchain, the possibilities for tackling water issues have multiplied. 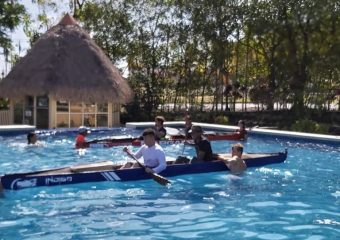 Sport or sports are all forms of usually competitive...
Leer más